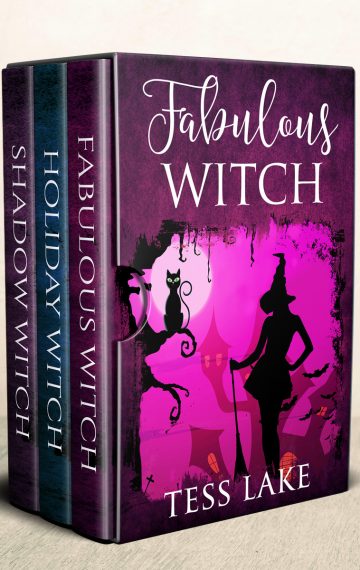 Fabulous Witch (Torrent Witches Cozy Mysteries Book 4)
Harlow Torrent, part-time journalist and full-time Slip Witch has a new job working on the set of Bella Bing’s latest movie, filming in Harlot Bay.
It’s meant to be a change of pace but when the lead actor, Mattias Matterhorn, dies on his first day on set, Harlow is pulled into a dangerous plot.
A saboteur is on set and they’ll do anything to shut the film down… including murder.
With the ghost of Mattias demanding she find his murderer, her witchy cousins Molly and Luce tracking down a thief and her Aunt Cass getting into hot and spicy trouble, Harlow has her plate full. It doesn’t help one bit when she Slips and starts a magical storm…

Between murderous teenagers, a secret buried in the past, Hattie Stern on the warpath, Christmas approaching and Aunt Cass suffering a very froggy problem, Harlow is doing everything she can to enjoy her holiday but those witchy problems just won’t let her rest…

Shadow Witch (Torrent Witches Cozy Mysteries Book 6)
Harlow Torrent, Slip Witch, is just trying to hold everything together. All she wants to do is keep the missing-presumed-snarky Aunt Cass’ business running, help the moms with their new bakery and maybe spend a minute or two with her boyfriend, Jack. She’s trying not to think about the possibility she has a spell cast upon her, one that may be more powerful than any of them can understand.
She can’t help but to be pulled into a new mystery when someone comes to her with a personal plea for aid: elderly residents of Sunny Days Manor are going wandering, leaping fences, stealing cars and then forgetting everything before they die… or are murdered.
Is this the work of slippery all-around bad guy Sylvester Coldwell or something supernatural and far more deadly?